Konya is a city in Central Anatolia with a population of around 2 million.

An important metropolis even in classical antiquity, Konya reached the peak of its power and wealth during the middle ages when it was the capital of the Seljuk Sultanate.

Persian poet and Sufi Jalal ad-Din Muuammad Rümi lived in Konya for almost 50 years. His mausoleum is in the city, and his followers have become famous, known as the "Whirling Dervishes". 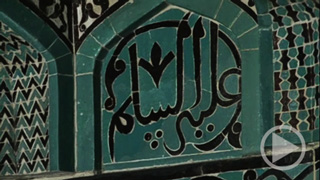 This mihrab was once the centrepiece of the Beyhekim mosque in Konya, created in the 13th century as a gift to Seljuq sultan Kilic Arslan IV. The frame is covered with Kufic script of the throne verse from the second surah of the Quran…
▶ The Museum of Islamic Art▶ Konya
01:38
This website uses cookies - for more information about this and your rights as a user, please see our privacy policy. Click on "I agree" to accept cookies and to be able to visit our website directly".